Just a Too Darn Geeky Review 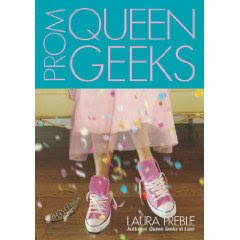 Laura Preble was one of our first bookshelf interviewees, a big supporter of Innovative and the author of a geeky series called The Queen Geek Social Club. The latest in the story of Becca, Shelby, Amber and Elise's quest to geek out the world is Prom Queen Geeks, released this September.
-
In this third book, Shelby is caught between two worlds (or two proms.) Becca is determined to create an alter-prom to say "Pooh pooh" to the high school elite and "hello!" to international geeks. However, Shelby's beloved-and-often-neglected boyfriend Fletcher is running The Real Prom and wants Shelby to go with him. Returning cast members are Euphoria (amazing robot), Mad Scientist Dad (clueless and adorable) and Thea the Mother of Art, as well as all those other geeks populating the Geek Club.
-
Mixed bag on this one. On the proverbial one hand, Queen Geek Social Club needs to be in print because it's a recognition of a huge teen counterculture that Gossip Girls ignores. Not everyone wants to be popular; that's a fact. I also really appreciate how Laura Preble has woven the themes of boy-girl-bestfriend dynamics into her books, because it's a subtle conflict that happens in real life all the time: again, something that is ignored in most teen literature.
-
On the other (left, maybe?) hand, I wasn't too happy with either Becca or Shelby. Becca's behavior, which in other books has been feminist assertive and enjoyably belligerent, was down right rhymes-with-witchy. I didn't find her likeable at all. Shelby, in contrast, annoyed the heck out of me for being so passive. Her passive-aggressiveness, or inability to tell the truth to those around her, is the real conflict of the novel. Everyone wants her to do something, but what does Shelby, the protagonist, want?
-
I didn't think this conflict was resolved as the prom [SPOILER] problem ends with Shelby realizing how much her friends and Fletcher love her. Although there was a hysterically funny police car scene involved.
-
Laura has a kick-butt website over at http://www.queengeekssocialclub.com/ , where you can find out more about the Geeksters, how to buy the books and Laura Preble herself.
Posted by Gabrielle at 7:50 PM