Megan Kelley Hall is the debut author of Sisters in Misery, a successful freelance writer and a founding partner in Kelley & Hall Book Publicity and Promotion. She studied creative writing at Skidmore College under Steven Millhauser. Megan lives in Salem, Massachusetts (near the setting of her novel!) 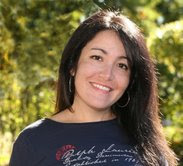 Yes it's true. The city of Philadelphia is in chaos but it's a happy chaos~ Everyone in the city is going be out today and joining the parade on Board St!

Thanks for the wonderful interview =) I'm dying to read this book!

Thanks for interviewing me for your blog, Gabrielle! Have an enjoyable hiatus and congrats on moving ahead into postsecondary education (as well as your car getting an Acceptable Grade). :)
Looking forward to reading your blog upon your return.