Bookshelf: Jaime Adoff and The Death of Jayson Porter 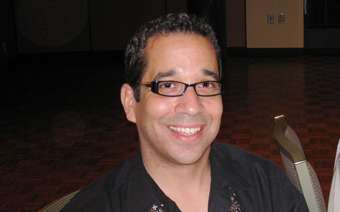 Jaime Adoff was born in New York City but grew up in Yellow Springs, Ohio. He received a Bachelor of Music degree from Central State University in Ohio, where he studied drums and percussion. Moving to New York City in 1990, he attended the Manhattan School of Music and studied drums and voice. Jaime's work has received multiple awards and starred reviews, including the Coretta Scott King/John Steptoe New Talent Award.
-
Jaime's latest YA novel The Death of Jayson Porter has been receiving rave reviews nationwide, including a Starred Review from Booklist and VOYA magazine. It has become one of the most talked about books of 2008. He is the son of the late Newbery Award-winning author Virginia Hamilton and renowned poet Arnold Adoff. Jaime Adoff lives in his hometown of Yellow Springs, Ohio.
-
INN: The Death of Jayson Porter deals with the harsh realities of urban life. What drew you to write a book set in this particular scene?
JA: I had the idea for this book for a few years, just sitting on my desktop. I believe I had the opening piece and a few rough ideas and that was about it. It wasn't until a school visit a couple of years ago that I realized this was the book I needed to write. One after the other the students would share their stories, losing a friend or relative to violence. They shared thoughts of suicide, some had even tried.
What really got to me was how much hope they all had. How they knew there was a world beyond their neighborhoods, a world beyond the violence that was their lives. They had been through more than most of us could ever even imagine, and yet they still had smiles on their faces. This is what inspired me, and at that moment I knew I had to revisit this story that had sat for so long on my computer. I had to write this book . . .
-
INN: What's something you'd like readers to know as they experience Jayson's story?
JA: I’d like them to just try to imagine themselves in Jayson’s shoes, what would that be like? To try not to judge, to wonder what they might do in a similar situation. And hopefully see his story as a cautionary tale, sadly one which is repeated far too often in the lives of the many Jayson’s in the world.
INN: If you could, which Guinness World Record would you break?
JA: The record for most books sold!
INN: What made you become a writer?
JA: After over ten years as a singer songwriter (trying to be a rock star!) I began writing as a form of therapy for myself. Never thinking it would turn into anything more than my thoughts on a page for my eyes only. Well, I started filling up notebooks with poems and stories and ideas and soon I just couldn’t deny what was happening.
One thing led to another and I was fortunate enough to have my first book published (The Song Shoots Out of my Mouth) in 2002. After 4 books published and number five out this November(Small Fry, a picture book. ) I can’t imagine myself doing anything else!!
-
INN: Any advice for teen writers?
JA: Keep writing and revising and working on your individual voice. That is what is most important. How you tell a story, how you write a poem, your particular point of view. Take your time, develop your style and write everyday. Don’t be in a hurry to get published. Now is your time to experiment, read and write as much as you can, but most importantly have fun doing it!!
Thanks so much, Jaime!
Visit Jaime's ultra-cool website at http://www.jaimeadoff.com/
Buy The Death of Jayson Porter at http://www.amazon.com/Death-Jayson-Porter-Jaime-Adoff/dp/1423106911
Posted by Gabrielle at 11:36 AM