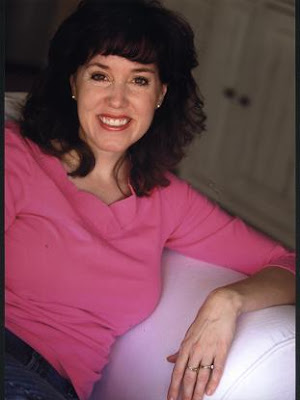 Janette lives in Chandler, Arizona with her husband, five children and enough cats to classify her as "an eccentric cat lady." She did not do this on purpose. (The cats, that is; she had the children on purpose.) Her books have sold over 650,000 copies, including It's a Mall World After All, All's Fair in Love, War and High School and How to Take the Ex Out of Ex-Boyfriend. Her 2009 releases are My Fair Godmother and Just One Wish.
INN: Why did you start writing?
-
JR: Partially I admit, to avoid housework. When standing in my kitchen and I think, "Hmmm, I could clean the fridge or I could write something," writing generally wins out. But I also write because I have characters and stories that constantly run through my head, and I want to write them down so I don't forget them. I'm sure in some times and places in history this was cause for heavy medication, but luckily nowadays you can just call yourself a writer and actually get paid for this malady. This is pretty cool and much better than, say, being burned at the stake.
-
INN: Several of your books (All's Fair in Love and War, Revenge of the Cheerleaders) feature cheerleaders. Were you a cheerleader, and if not, what did you think of cheerleaders when you were in high school?
-
JR: I was a cheerleader for my freshman year of high school. I liked cheerleading better than playing the sports because I'm not a competitive person. I just don't want to fight with anybody over who gets a ball. Howeve, it became apparent really fast that I wasn't cut out to be a cheerleader. I have double-jointed elbows and it isn't a pretty sight when you're doing cheers.
-
Cheerleaders carry a serious stigma in our society. Just the word 'cheerleader' is enough to evoke hate and disdain (or envy and approval) from certain groups of people. Really, cheerleaders are like anybody else--only wearing short, tacky skirts. Some are wonderful people and some should be banished to an island with Paris Hilton and ignored for the rest of their lives. -
INN: What can you tell us about your new 2009 releases, Just One Wish and My Fair Godmother?
-
JR: They are both fabulous books!!!! And I'm not just saying that because I wrote them. If I hadn't written them I would still love them and probably carry them around forcing them on strangers, saying, "Have you read these incredibly brilliant books?" This, by the way, is why I get invited to very few dinner parties. My Fair Godmother (January 2009) is romantic comedy about a girl who wishes for the perfect prom date (her boyfriend just dumped her for her older sister) and her less than competent fairy godmother sends her back to the Middle Ages, where she ends up being both Cinderella and Snow White. In order to get back to the present day she has to help a friend kill an ogre, slay a dragon, and defeat a mysterious and hunky black knight.

In Just One Wish Annika is trying to give her little brother (who is about to go into surgery for a brain tumor) his favorite wish--to meet the actor who plays Teen Robin Hood in a popular T.V. series. She sets off for Hollywood to find and convince him to come back with her to visit her brother. Although this book has a serious and thought-provoking undertone, it is still a romantic comedy too.
-
INN: Have you ever taken a funny scenario from real life (a prank, joke or awkward situation) and written it into one of your books?
-
JR: I use real events from my life and my friends’ lives all the time. Once I even went as far as taking the dialogue from my teenage daughter's cell phone and using it in a scene. That psychotic cat scene from All's Fair in Love, War, and High School--yeah, that actually happened to me, but I was by myself at the time and not on a date. There aren't a lot of advantages to driving through traffic wearing a psychotic on your head, but if you're a writer you can always use this kind of stuff in your novels.

INN: What's the craziest thing that's happened since you've been published?
-
JR: Crazy is just a way of life for me, although I don't think it has anything to do with being published. It's more about having five children. Seriously, you take your one-year-old twins and their three-year-old brother to a store and things get crazy real fast. (I'm so glad they’re all older now.) As far as writing goes . . . I still find it weird if people recognize me. It doesn't happen very often though. Mostly I'm just your average person, except that instead of dressing up to go to work somewhere every day, I stay in my pajamas and work on my laptop.
-
INN: Any advice for teen writers?
-
JR: Keep reading, keep writing, but go to college and get a degree in something that makes money because generally it takes a long time (if ever) for writers to be able to support themselves on a writing income. But trust me, it's still worth it!
-
Thank you, Janette!
-
Visit Janette Rallison at her website (www.janetterallison.com) and blog (www.janette-rallison.blogspot.com).
Posted by Gabrielle at 7:30 PM